Arael's Clan
Arael is from the Black Dog tribe of the Uthgardt, a minor splinter tribe or large clan (ca 240 strong) from the Tree Ghost nation, that has taken residence towards the South edge of the High Forest. Their tribe takes its totem from the large black dogs (or small wolves) that guard the tribe.The young squaw 'Dru' was 15 years of age and due to be given a name by the Great Oak on her 16th birthday (or 1st nameday), as all tribe members have done for generations. The ritual involved spending her 15th year communing with and tending to the Great Oak. However, this all went awry when a chaotic evil Tiefling, Morthos, came through the sacred grove, setting it alight and corrupting the life out of the Great Oak with hellfire. The Elder Shaman of the tribe summoned the last of the tree's dying essence to cast a great curse of misadventure upon the Warlock, and any who would travel with him. Not believing this curse could have worked and requiring that balance be restored, the Druids split apart from the elder council and entered solitude for weeks. When eventually they emerged on the squaw's naming day, they commanded that if she were to be named as a tribe member and gain her druidic mantle, she would have to restore balance for failing to protect the tree. Leaving the village only with the weight of her great shame upon her shoulders and her black dog yearling, Drifter, Dru set off for the nearest settlement to search for clues...


Tree Ghost Tribe
This Uthgardt barbarian nation are the largest Uthgardt tribe inhabiting the High Forest, and the primary human inhabitants of the forest.  It is not uncommon for them to show signs of elven ancestry.  They split from the corrupted Blue Bear tribe (destroyed at Hellgate Keep) in 1313 DR.  Their Ancestral Mound is the Grandfather Tree at the heart of the High Forest, tended by the most powerful Druids of the tribe.
The Tree Ghosts currently have no leader above the level of the clan, an extended family grouping typically of around 150 Uthgardt, living in semi-nomadic villages scattered throughout the Forest.  Best estimates put the total Tree Ghost population of the High Forest at around 12,000, comparable in numbers to the rival Forest Orcs and Goblins, and more numerous than the reclusive Wood Elves or vicious Forest Gnolls.  The Tree Ghosts practice limited farming, but derive most of their sustenance from hunting and gathering.


Orders of Torm (Dragon 381)
The temple of Torm is a popular, far-reaching one, mercifully free of the stigma attached to the priesthoods
of previous gods. For instance, Helm’s reputation was stained by the actions of zealous missionaries who conquered frontier lands in his name. Many branches of Torm’s temple exist in the Realms, and each one varies in outlook and uses slightly different holy symbols.

The Evenhands of Everlund
An upstanding order of knights based in Luruar protects the civilized lands of the north. Commanded
by the Lord of Everlund, Kel Moorwalker, the order strives to emulate and honor Tyr, the fallen god of justice, who was Torm’s predecessor and the deity he is said to have most admired.
Symbol: A gauntlet, palm forward, with the scales of justice emblazoned in the palm. Sometimes, the
gauntlet is set against the silver tower of Everlund Suggested Classes: Cleric, fighter, paladin

Girded Healers
An order of knights sworn to both Torm and Ilmater, these divine servants favor the healing powers of the
divine and work to ease the suffering caused by the Realms’ evils. Girded Healers operate throughout the
Realms, but particularly in those lands worst ravaged by war and magical catastrophe.
Symbol: An open gauntlet, fingers spread, loosely wrapped in white linens around the wrist
Suggested Classes: Cleric, warlord, monk
________________

AIRSPUR - CAPITAL OF AKANUL (Dragon 377)
The vibrant capital of Akanul, Airspur clings to the cliffs on the east side of a southern bay off the Sea
of Fallen Stars.
Population: 30,500; another 70,000 live in the nearby countryside. Most citizens are genasi descendants of refugees from Abeir, the majority being windsouls and stormsouls. Small populations of other
races live in the city, particularly half-orcs who lived near the ruins of old Airspur before the genasi rebuilt
it. Few dragonborn stay in the city for long due to tensions between Akanul and Tymanther.
Government: Queen Arathane, a windsoul genasi, has ruled Airspur since the death of her long-lived
mother. Four stewards control various aspects of the city, and together they can overrule the queen’s
edicts. Genasi occupy all important roles of power in Airspur. This is due to the political structure, traditions from Shyr in Abeir, and even outright prejudice (particularly against dragonborn who might be from Tymanther).
Defense:  The Airspur defenses are divided between three corps: the Sky Guard, the Ground Defense League, and the Wave Riders. These professional soldiers form the core of its armies and the city watch during peacetime. The rest of Akanul’s military is conscripted from the population, although only a small number of nongenasi are included in the conscript catalogs.
Inns: Shadow of the Rock, Cliffwatch, Spireview Inn, Rang’s Hostelry.
Taverns: Seven Stone Steps, The Hook and Eye, The Wind Clipper, The Drunken Gull.
Supplies: Thwaite’s Tack and Gear, Gwind’s Sundries, Seaside Provisioners.
Temples: None. The genasi of Airspur are uncertain about religion. The difference between gods and
primordials or other powerful beings is not firmly established in their minds. Even so, religions of all
kinds exist in the city. Priests of real gods and cults of false powers come to Airspur to gain converts,
and some achieve results. As yet however, the steward of the Sea has blocked the construction of large
temples that would take up land otherwise useful to the people or the state, and the Steward of Fire has
the city watch occasionally check in on individuals of religious bent who might choose to follow a god’s
edicts instead of the city’s laws.


Queen Arathane
The common people of Akanul consider Queen Arathane strong and fair. She is roundly praised for
continuing her mother’s policies of state support of descendants of the refugees of Shyr. Even the poorest
among the genasi can expect shelter and food.  The nobility have a more complex relationship with their queen. Frequently opposed by the stewards early in her rule, she sometimes chafes under the
Covenant of Stewardship and frequently seeks ways to achieve her ends without resorting to the Court of
Majesty. The Firestorm Cabal represents one of these tactics. These privateers are sworn to protect Akanul, but the group is known to hold Arathane and the stewards in contempt. Arathane tacitly condones their presence and their occasional antics because of their usefulness as a supplement to the nation’s defenses and as nongovernmental foil against other nations such as Tymanther.
In addition to friction with the stewards, Queen Arathane finds herself besieged by suitors and potential matchmakers. The queen is approaching her fourth decade of life, and the question of succession
causes a great deal of gossip. Yet the iron-willed Arathane doesn’t consider it to be a pressing issue since
both her mother, Queen Cyndra, and her grandmother bore a child late in life.

Tradrem Kethtrod, Steward of the Earth
The current Steward of the Earth is an earthsoul genasi, breaking the string of watersouls elected to the position. Until Tradrem, no earthsoul had aspired to a higher position than leadership in Akanul’s armies. Coming from a minor noble family, Tradrem feels he has much to prove, and the thoughts behind
his earnest face constantly turn to the politics of any given situation.
Tradrem holds the Stewardship of Earth, a position in charge of understanding the landscape—both literal and political—in which the genasi find themselves. He heads a group of informants and spies both within and outside Akanul, and he commands the efforts of surveyors and explorers. Only the monarchs of
Akanul and former Stewards of the Earth have a true understanding of the size, means, and goals of the
organizations that the Steward of the Earth controls. The power this provides is nominally checked by
the fact that the Steward of the Sky can prosecute any illegal activities, but the queen can overrule any
prosecution. Stopping that edict requires the Steward of the Earth and the other stewards to vote to prevent it. In the few decades since the inception of the Covenant of Stewardship, this system has yet to be
tested due to loyalty among the noble houses, but as Tradrem seeks to use his powers to their full extent,
he might find that he and the queen have reason to exchange favors.
Notes: The Steward of the Earth has recently been dispatching Firesoul Genasi agents to the lands of the Western Heartlands, via a Portal that exits in the Sword Coast region south-east of Waterdeep.  They are rumoured to be searching for an artifact of elemental fire, possibly of Netherese origin. 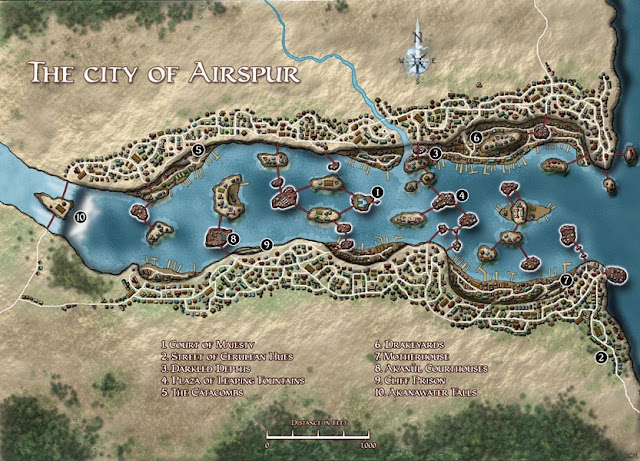 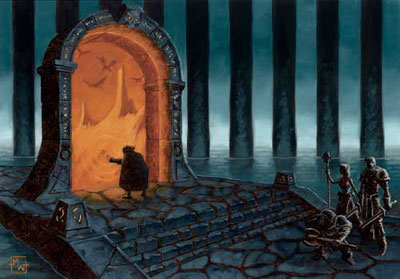