Investigate dwarven grain silos, ambush and wipe out a 5 man guard patrol. Head west over the bridge, but Seraphus' clunking alerts lizardman guards, leading to a huge battle centred on the lizardman lair - a lizardman escapes north to raise the alarm while lurking scrag trolls attack Dagny from the south. Alarm gong sounds and cultists attack from the north. 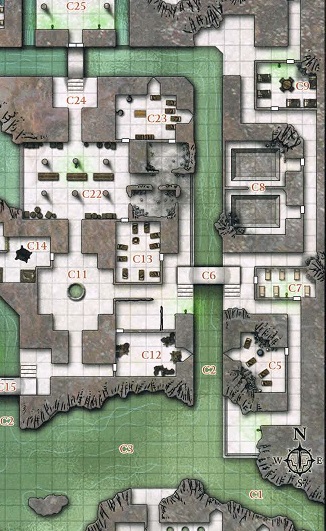 Party defeat 12 ghouls at the quay beneath Rivergard, then row 2 miles upriver to Tyar Besil, where they defeat numerous cultist guards and a big shark that bites Dagny.

C1 The stream
opens into a large underground lake. To the right, a
crumbling stone quay leads to a tunnel heading northeast.
A ten-foot skiff is moored to the quay, and a torch burns in
a bronze sconce by the tunnel mouth. Beside the quay, a
twenty-foot wide canal leads north from the large lake. The
lake stretches westward into darkness.

C3 This underground lake is dark, still, and cold. To the west,
the lake ends at a gravel shore, and a faint glimmer of
torchlight hints at a channel or canal to the north. To the
south, a crumbling stone quay leads to a dark passageway.
At the east end of the lake, another torch burns above
a larger quay, with another passageway leading east. A
second canal leads north from the eastern portion of the lake, and the glimmer of light comes from that direction,
as well. The ceiling of this cavern is a dome, at its highest point almost 50 feet above the water.

C5 Prison
An iron hasp-and-pin arrangement secures the door to
this room. The lock can’t be reached from inside but is
easy to undo from the corridor. This room evidently serves as a prison. A half-dozen straw
pallets covered by threadbare blankets are spread out on
the floor, and a cask of water leans against one wall. A dark,
slit-like window looks out to the west.
The room is lit by a single candle mounted on the east wall.

C6 Victory Bridge
A stone bridge spans the canal in a single elegant arch.
Steps on each side climb up to the bridge. The bridge has
a low stone balustrade, and its weathered sides are carved
with images of dwarven battles. A single torch burns eternally at the apex of the bridge. The stairs on each side of the canal climb 10 feet from the quays, so the bridge is 15 feet above the water level.

C7 Reaver Barracks
This old chamber has been furnished with six plain wooden
bunks and sacks of provisions. Stone doors exit to the
south and the west.
Posted by Simon at 10:47 No comments: