While the others are away in the Shining Vale etc, Sharatu Alani Rhenya & Kasumi investigate cult activity in warrens under Red Larch, and find a powerful Priest of the Black Earth, Larrakh. Recruiting aid from AllFaiths Shrine and Constable Harburk, a boy is rescued and the cultists and Larrakh are eventually defeated in a brutal battle at the quarry, but at the cost of 2 of Harburk's 4 militiamen. Harburk investigates and arrests several local 'Believers' for cult activity.


“I’ll be just making a fly-over and check out any weird going-ons with that chariot-maker house.” said Rhennya, just before transforming into a beautiful red and brown-feathered owl in front of our very eyes.
We were standing watch on the other side of the street from the house we were targeting that night. Our mission: following up on these rumours about a cultist nest that I got earlier from the apprentice who was working there. His boss was allegedly using a secret door in the workshop and other people were doing so for some mysterious cultist activity.
Hoping that a night surveillance of the house would reveal something helpful, even maybe about the missing convoy, our resourceful druid morphed into a bird of prey and surveyed the area. Soon enough, she noticed a couple of people entering the premises from the side-door and not re-appearing. We were onto something. After a quick debriefing with Kasumi the Monk and Sheratu the Dragonborn, Rhennya took off again and located a gap under the roof and entered the house, before morphing back to her human form and opening that side-door for all of us to sneak in.
Very soon, we found the secret door and entered a narrow tunnel that curved a few yards later before ending on a strong oak door. But a partial collapse of the roof cladding a few feet away from the end of the gallery, made the progression towards that door quite difficult.
Behind the door, we could hear a small choir chanting and a strong, passionate voice making incantations about the virtues of the spirit of the black earth and its generosity towards its worshippers, blah blah blah…

:-)
Feeling definitely like a fearless and powerful bunch of adventurers, we agreed to burst into the room, interrupt whatever impending doom these suburban cultists where preparing in there, victoriously clean up the room while everybody is frozen by surprise, and go back to the pub before the last order bell rings.
Well, it didn’t work out that great after all. My torch completely spoiled the surprise effect when we opened the door, then the rubble in the corridor prevented us from invading the room in one fell swoop. And finally, the high-priest at the origins of the incantations, was perfectly unimpressed by our lack of military organisation and more than ready to teach us a lesson in good religious etiquette.
The room itself exhibited an impressive collection of ancient tomb-like slabs which made the occupants feel almost out of place with their fresh ceremonial robes and gold-plated gargoyle masks.
Commanding the centre of the room, the high-priest Larrakh, was wearing a stone-looking spiky armour and changed immediately his incantations to a much less cheerful tune.
I made a short step inside the room and aimed my finest arrow at him: With an anticlimactic noise, the arrow bounced on his shoulder. Immediately nocking another arrow, I aimed again and… the arrow bounced on precisely the same spot on his shoulder. Maximum points for grouping my shots but a big zero for getting my friends on top of this encounter…
Larrak finished his prayer and a deafening deflagration blasted through our bodies and ripped our eardrums apart. The damage caused everybody but yours truly to collapse on the floor, unconscious. I was barely alive if I am honest...
Remembering my military training with the great and wise Dunstan Ironforge, I could almost hear him say: “This is a turning point in the battle if I ever saw one”. With three bodies to carry and the door that opens in the wrong direction, I need a solution very quickly.
Fortunately, I remembered I had two healing potions in my satchel so I decided to gain some time by jamming the door using Rhennya’s staff, then revive Sheratu who was the closest to dying.
While I was still holding the door, Sheratu then revived Rhennya who casted a “healing word” to Kasumi.
We then fled as quickly as possible before my makeshift contraption finally splintered and we took refuge in the All-Faiths Shrine (where Kasumi had a good rapport with the town cleric). He advised us to join him and seek help from Constable Harburk, a reliable and trustworthy battle-hardened veteran of the Orc wars who would prove crucial in our counter attack. He also enlisted with him half a dozen of his deputies and footmen.
We went back to the underground gallery but the crypt which had almost witnessed our total demise was suddenly devoid of any clues or even any evidence that this cult has ever been here. Thankfully, the no-nonsense intuition of Constable Harburk didn’t falter and he led the way to push on with the exploration of what did reveal to be a modest underground complex. Cage-traps, voracious rats and even a poor village child about to be sacrificed did distract us for a short while but we soon had explored the whole network and found the last door towards the exit of that secret passage: The Quarry just outside the village.
There, the cultists, a half-orc and, last but not least, the high-priest Larrahk were waiting for us, having set up an ambush around the quarry.
In spite of being fully surprised, what followed was a much better expression of what our group is capable of and thanks to the support of the constable and his men, Sheratu excelled with his draconic powers, Kasumi entranced her enemies with her dance-like katana swipes and Rhennya provided a stunning mix of deadly moonbeam power and lifeforce-giving relief for the wounded.
Shortly after the execution of their leader, the couple of cultists still alive were just the endgame and, in true fanatics, died without surrendering. Unfortunately, the Constable’s forces were also dented by a couple of brave men, for whom we will be ever so grateful.
Back at the village, PC Harburk wasted no time in making a series of spectacular arrests and promptly cleaned up the village of any rotten branches. The parents of the child who was kept prisoner in the secret passage were awaiting the city judge to come to Red Larch but Harbruk hoped he would show leniency on the grounds of diminished responsibility due to the grasp of the cultists on their weak minds. 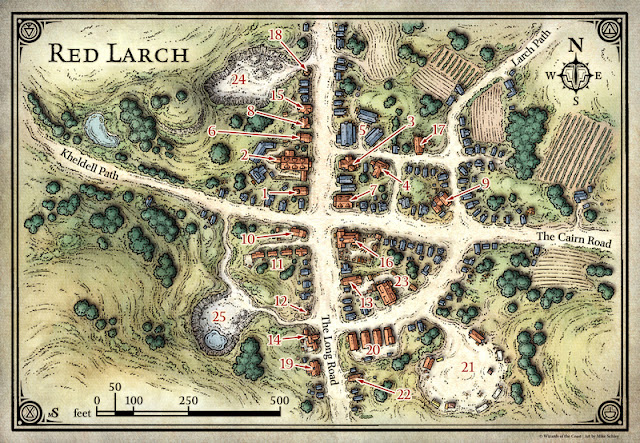 Over the next Tenday (T2-T3/M5/1491 DR) Constable Harburk conducts his investigations, aided by the Tempus priest Imdarr Relvaunder, who requests an extension of his stay at Red Larch from his superiors in Waterdeep. Imdarr conducts the burial of Harburk's two deputies who fell bravely in battle with the cultists. The dead bodies in the rat chamber are buried too. Rather than burial, the bodies of Larrakh the priest and the six dead earth cultists are put on a high funeral bier and burned, to annoy their spirits in the afterlife.
No one in Red Larch admits to recognising Larrakh the Earth priest, but the six dead archer cultists with tin-gilt stone gargoyle masks are identified as having been resident at Mother Yalanta's boarding house (#4 on map) for some time; where they had claimed to be wandering hunters.
After questioning the rescued boy Braelen Hatherhand, Harburk arrests the following as suspected 'Believer' cultists - Braelen's father Rotharr Hatherhand, a retired carpenter Baragustas Harbuckler, Ilmeth Waelvur the owner of Waelvur's Wagonworks (#16), and Marlandro Gaelkur of Gaelkur's Barbers/Tools/Tavern (#17). Searching Gaelkur's also turns up evidence of a counterfeiting business. Harburk also questions Albaeri Mellikho, a stout pot-bellied and formidable woman who owns the local quarry & stoneworks (#18), but finds no evidence that she or her stonecutters are members of the Believers, or that they were aware of the secret tunnel from the quarry to the tunnels under Red Larch.

From questioning, Harburk believes the following about the Believers:
They are/were a secret group of town elders, who guard the moving stones and make sure no one disturbs the 'Delvers', the six long-dead miners entombed in the chamber of the moving stones. They watch the moving stones carefully, looking for omens. Baragustus when questioned told Harburk:
"From time to time the great stones change position when no one is watching. That is how they talk to us. They show us signs of coming danger and warn us when we make bad choices."
The Believers group have apparently been around for years, but it looks like the priest Larrakh and his men turned up more recently, only a few months ago. Harburk believes they were earth cultists, and that Larrakh had been working to turn the relatively harmless Believer group towards evil. The 4 prisoners all deny knowledge of the dead bodies found in the tunnels, or that their families were guilty of anything.

Constable Harburk sends a message to Waterdeep requesting reinforcements, and a judge to try the 4 arrested Believers, who he is holding in the cold store of his butchery. A tenday later word comes back, just after Seraphus Dagny & Ralf have returned after around 2 Tendays away from Red Larch, and Harburk seeks you out at the Swinging Sword Inn:

"I've been informed that I am to take the four prisoners up to Feathergale Spire to stand trial, and request any needed garrison from the Knights there. Thurl Metrosska, Lord Commander of the Feathergale Knights, has been granted full judicial authority over these lands. I could do with an escort, if you're up for it?"