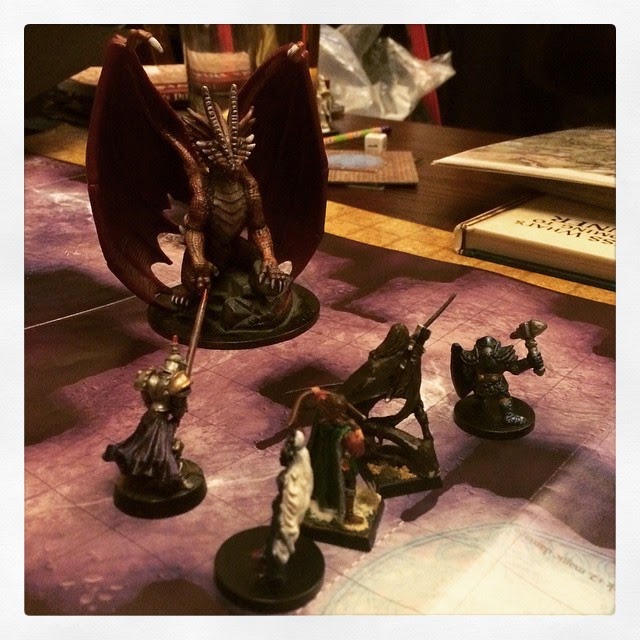 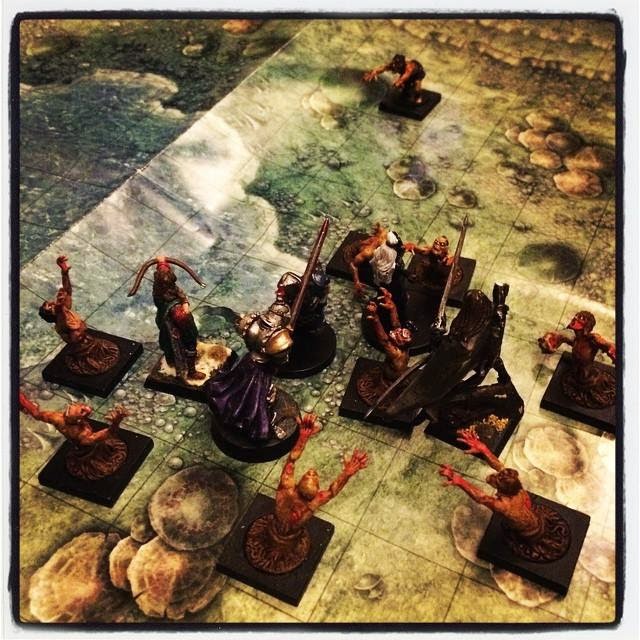 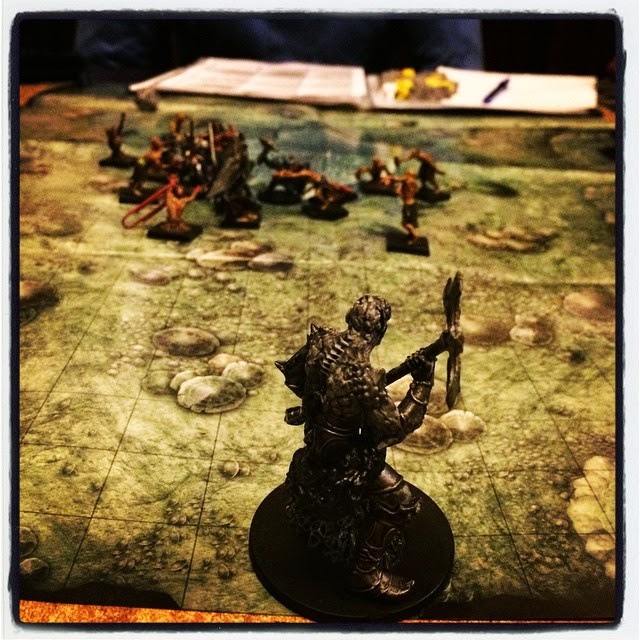 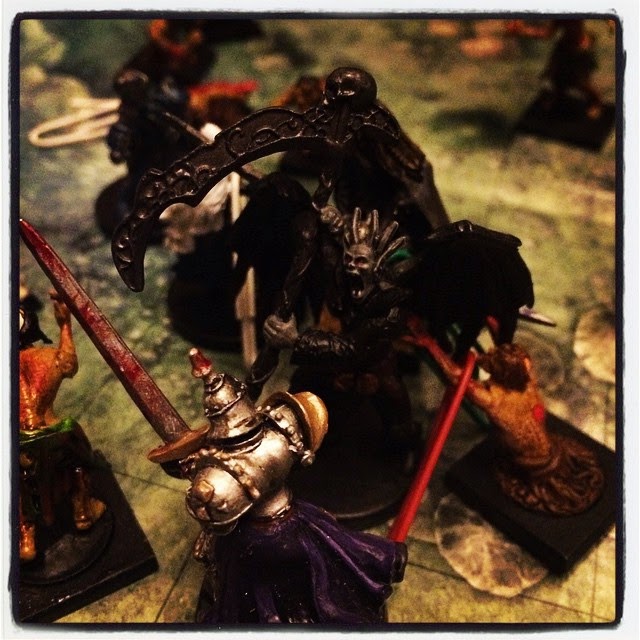 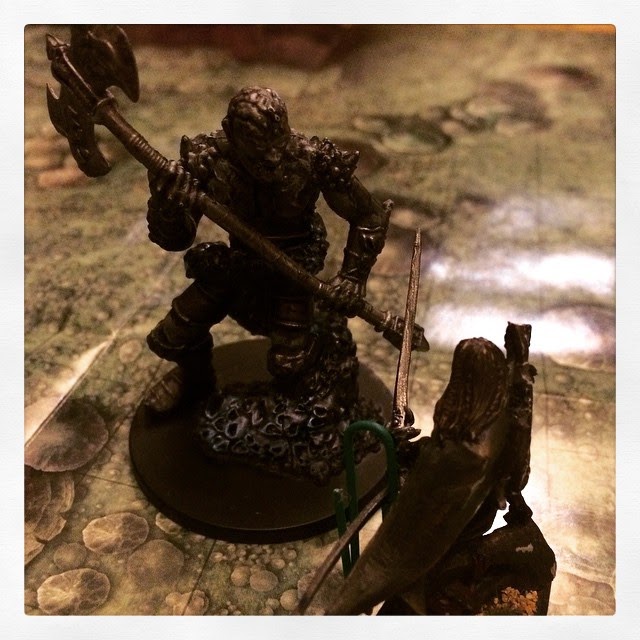 Brikos Stoneshoulder is researching how to defeat Stonefang, a task the legions of Ammarindar never truly accomplished. This will enable Dunstan to marry his beloved Serka. Brikos arranges a meeting with Hallomak Stromm in Waterdeep. Hallomak has located a guide to the primordial temple known as The Roots of the Earth - a mysterious drow called Dhaunayane Nasadra. Hallomak believes that the Roots of the Earth holds the Eye of Terror (Terra?) , a primordial artifact that is rumoured to maintain the link between Stonefang and Ogremoch, elemental prince of evil earth. Destroy the Eye and Stonefang should be rendered mortal.


Paelias visits the Temple of Selune, High Priestess Amathea tells him that she and Hallomak are battling the devil-cultists called the Ashmadai, allied with Szass Tamm of Thay, and that the Ashmadai seem to be led by a great power of the infernal planes. Amathea gives Paelias a moonstone, which should enable her to communicate with him even in the depths of the Underdark.
Hallomak and Dhaunayane manage to open a portal to the old Dwarves' Deep mithril mine, 9 miles below the High Gap in the northern Graypeak mountains. Nasadra, Jareth Lirael Paelias and Dunstan step through, and encounter a huge elder red dragon - Azaegal, son of Xhitigal! Jareth surprisingly gets on well with the dragon, giving it an enchanted greatsword as tribute, and the group are permitted to pass. Dhaunayane leads them down into the lower depths of the Underdark, but a navigation error takes them into the realm of the Fomor lord called The Butcher. His zombies burst from the mushroom fields and attack; the butcher takes the field aided by a dark Sorrowsworn of Shar, which calls Dhaunayane traitor and tries to slay her. The enemy are defeated. On the Butcher's body is a Ritualist's Ring. Dhaunayane reveals that she serves Lolth. Last of the Nasadra, the royal line of Ched Nasad, she seeks to defeat the Shar-worshipping traitors who now rule Ched Nasad. 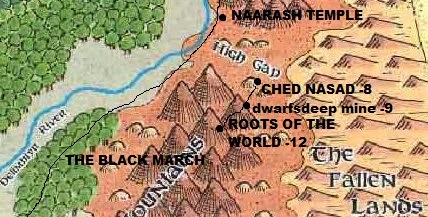 Dhaunayane Nasadra (Tiffany), Drow Warlock, renegade from Ched Nasad, Punisher of the Gods. Reveres Lolth and seeks revenge against the Jaezred Chaullsin and the followers of Shar who took over her city.

Current In-Game Date (as of Feb 2015) is M8 1484 DR.
1. The Stoneshoulder Bridge is well on the way to completion. Brikos Stoneshoulder aims to have it operational by the end of the year, allowing caravan traffic over the Greyflow for the first time since the Spellplague.
2. Under Lirael's direction new classrooms have been instituted across Northwood, most of the teaching is by local clerics, sages and wizards such as Anaveth, Brikos Stoneshoulder, Clintus Moonwatcher, and junior wizards from the Fiery Spire, aided by local assistants. Efforts are underway to recruit teachers from further afield.
3. Dunstan has been researching the legend of Stonefang, with a view to freeing Serka Glintshield from her Shadowed Chain vow. In between directing the construction of his bridge, the dwarf wizard Brikos Stoneshoulder has been examining the histories and prophecies on the Ammarindar Plates, the dwarven copper 'scrolls' stolen by the dragon Nightshade and more recently acquired by Arya from the Red Wizard Lord Myuni. He has found reference to a hidden 'earth temple' known as The Roots of the World, somewhere in the Deep Underdark below Ammarindar, below even the drow realm of Ched Nasad. In search of more information Brikos has been consulting with Hallomak Stromm, the legendary savant-sage of Waterdeep...