Party return from the Plunging Torrents to the Fane, navigate a mushroom forest and kill a grell, Rhenya plays a game with friendly-ish hill giants working for the Earth Cult, rest in a dwarven tomb, encounter and defeat three harpies. Sharatu passes through a black mist curtain and encounters an elemental myrmidon.
Posted by Simon at 18:05 No comments:

Kill 10 lizard warriors & Kasumi gets their gold, descend to plunging torrents, Alani kills a water weird, paddle to a cage, free 8 reavers who attack, Sharatu gets them to surrender after 4 are killed. They tell Dagny that Gar Shatterkeel is upstairs in the Fane of the Eye. 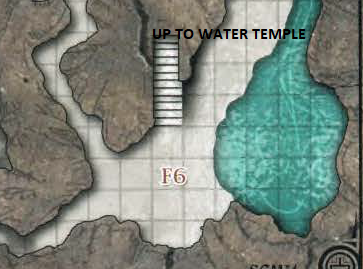 Group defeats three farting mezzodemons in a tough fight, short rests then descends a long dwarf stairway to the caverns below. Four water weirds attack from a plunge pool, two grab Kasumi & Rhennya and drag them below the water, but they prove squishy like most water-things and all are soon dispatched. Lizardman tracks in NW tunnel and strange insectlike tracks in SW tunnel, many footprints on gravel beach walk. Heading north along stream, Dagny nearly falls down a crevasse. Pebbles do go down the crevasse, and soon drums are heard in the deep. Further on the stream opens out into a cavern with plunging sinkhole to north, steps descending along its west edge, and steps up to the west.