While the others sleep, Dhaunayane conspires with Zesstra Teh'kinrelliz. Lirael arrives. Just after 'dawn' the group approach the Ruling Council's council fortress in the highest web level, posing as a guard with prisoners, Dhaunayane attempts to talk her way in but unfortunately claims to be a drow already in the council hall; the guards open fire, shooting down her conscripts; the group rushes forward to attack. Paelias breaks into the fortress entry hall while the others scale the walls, defeating a second wave of guards; their leader flees and shuts the door behind him. Bolg and the Orcs run up, Paelias uses them as a battering ram to break through the acid-trapped second door into the inner halls... 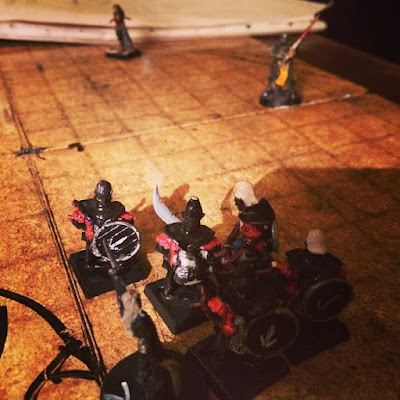 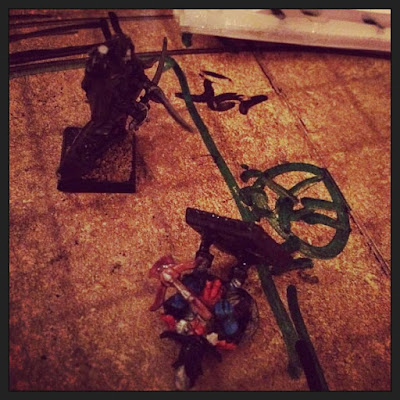 Heading through the slum district of Ched Nasad with their drow escort, the group encounter a battle between a gang of orcs & goblins and an onrushing horde of undead Dread Warriors and Hezrou demons - not to mention the Guardian Spiders corrupted by the Jaezred Chaellsin. All in a day's work...
The leader of the orcs is Bolg, a friend of Dhaunayane. He tells her the undead and demons are coming through Shadow portals all over the city, but most near the Temple of Shar, and leads her (with newly controlled Spider), her friends, and three surviving drow conscripts to his lair, then from there to the Teh'Kinrelliz mansion of her drow allies, where plans are made to depose the Chaullsin puppets and return Ched Nasad to the way of Lolth...