M1 1483 DR
The remaining Heroes of Loudwater escape the collapsing Tower of Ice on Arya's Phantom Steeds. Across the Vale, the Lesser Ice Portals collapse.

Along the frozen River Loagrann, an army of thousands of Chillborn Zombies advancing on Llorkh suddenly collapses, as do smaller zombie hordes throughout the eastern Vale.

At Llorkh the army of the Frost Giants is caught between the defenders of Llorkh under their Banite commander Kitana, the Tigerclaw Barbarians under Prince Konn, and the Army of Loudwater led by General Boris, Kitana's father and former King of Llorkh. The giants are defeated with great slaughter, only a few dozen surviving to flee back to the northern heights. General Boris, Prince Konn, and Queen Esmerelda of Llorkh are acclaimed as Saviours of the Vale (with due credit to Warden Lirael and the Heroes of Loudwater - brave amateurs, they also play their part...) >;)
The Tigerclaw Barbarians enjoy the revels of Llorkh a short while, before returning to the Direwood. Lord Boris avoids entering Llorkh, likely fearful of an assassination attempt from Esme, but returns to Loudwater to a heroes' welcome. Lady Moonfire congratulates Boris along with Warden Lirael and her band.

Much of the eastern Gray Vale is left in chaos and heavily depopulated. Those slain by the frost giants cannot be raised, their life force taken by Clenderi, but the priests ensure that at least their souls go on to Kelemvor's halls. Queen Esmerelda of Llorkh graciously reinstalls the Mountain King, Oro Loroth, in the ruins of Ogremouth as her loyal vassal, and directs her forces to incorporate and begin rebuilding the former Mountain King territories. In Orlbar the Light of the Sun  order of Amaunator takes power; Valeris' last comrade Toruvas the Eladrin cedes them Castle Valeris, the former Temple of Bane-Iyachtu, but Mistress Emesha has no desire to relocate there, instead garrisoning it with a small force of Amaunite Paladins.
South of the Grayflow, the villages of Brightwater and Graystone have long fallen under Queen Esmerelda's influence, and now petition to join her expanding kingdom. She graciously accepts. Her glorious rule now stretches across most of the Eastern Vale.
The ruined village & seminary at Erstlin  are incorporated into the Barony of deTrevani under Baroness Amara and her husband Sir Dolf Dragonheart, who sets about the rebuilding. M2-M4
As the snows of winter melt, a traveller arrives from the east - Crag the Goliath, brother of Boulder, comes to bury his brother and seek service with Jareth in the Northwood Guard.


Word comes from the eastern lands – war rages on between the great empires of Thay and Netheril.  Netheril has been reinforcing Aglarond and the remaining Red Wizards of Wizards’ Reach by sea from Sembia. Lord Myuni is reported to be prominent among the Red Wizards opposing Thay. Rumour has it that the Genasi realm of Akanul is also quietly supporting Aglarond and the Wizards’ Reach with magic and gold. Meanwhile armies of Thayan undead have been advancing west across Thesk and Lethyr, taking Uthmere, and threatening the final destruction of Impiltur. Thay’s ally Vaasa has reconquered Damara, and linked up with Szass Tamm’s undead legions at Uthmere. The Warlock Knights of Vaasa have also seized Hulburg, and threaten all the Moonsea. In response Fzoul Chembryl, High Imperceptor of Bane and Lord of Mulmaster, has allied with the Empire of Netheril against Thay, and Netherese forces in Thar are now moving on Hulburg.

Meanwhile the newly appointed Mashal of Sorrow Quinn Ebontide is currently in charge of purging the last of Orcus' forces from Deadhold, formerly Orcus' main bastion on the Shadowfell, now held by the turncoat Keeper of Deadhold in Shar's name.

M6 1483 - Northwood Barony is thriving. In the west, Boris of Secomber joins with the heroic Paladin Shaedra of Elturgard to defeat the fire dragon that threatens Secomber. 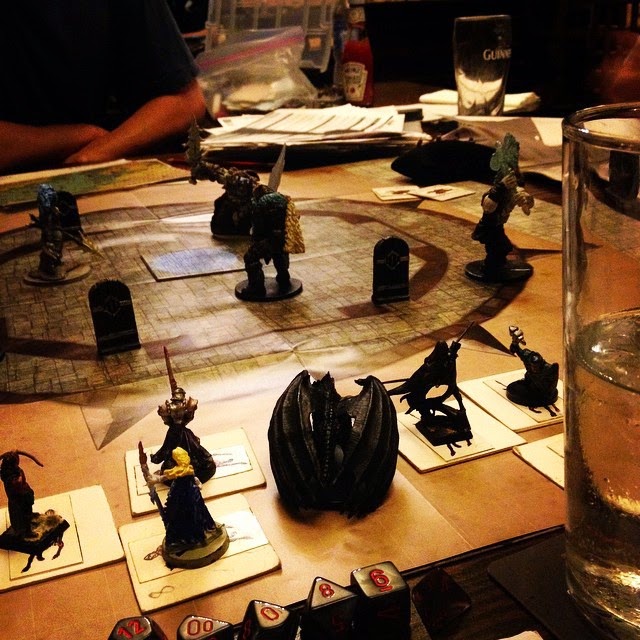 The PCs go to Timbervale to meet Dunstan, rest and plan. Next morning they fly towards Llorkh, where they meet Nightshade the black dragon as she takes down a couple of Clenderi's frost wyverns. They arrange to rendezvous with Nightshade at nightfall and together fly to Clenderi's tower of ice, which rises from the ruins of Ogremouth. In the portal chamber atop the spire they defeat Clenderi in a titanic battle. As the tower begins to collapse, Arya says farewell and ascends to the status of Primordial in the Elemental Chaos (aka Scotland)... >:)