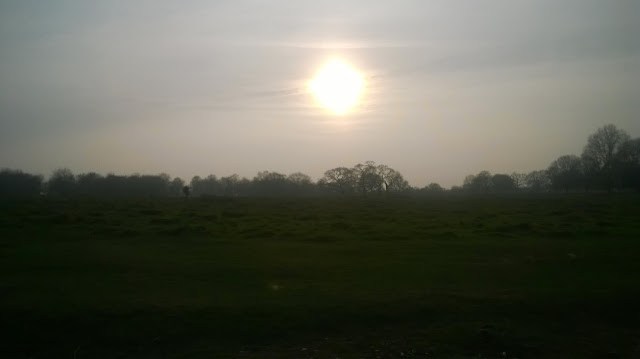 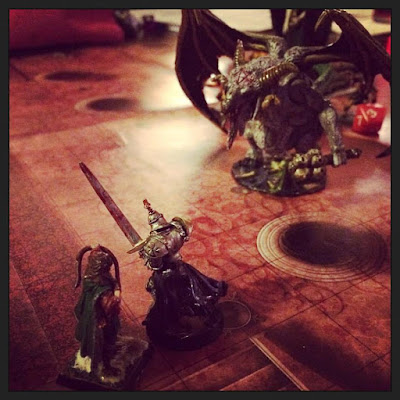 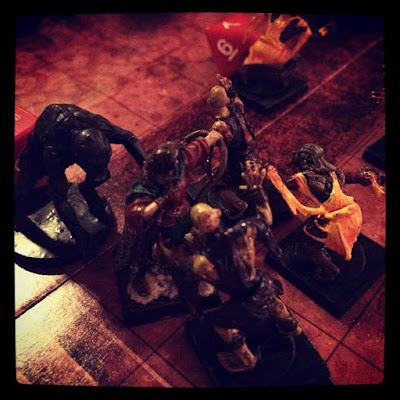 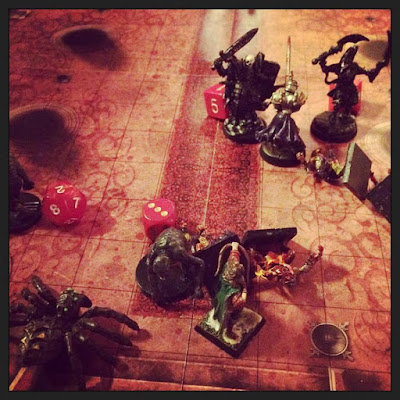 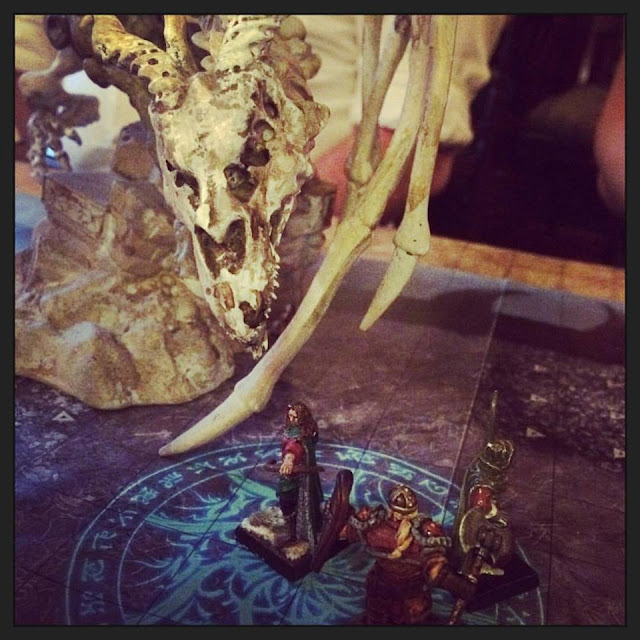 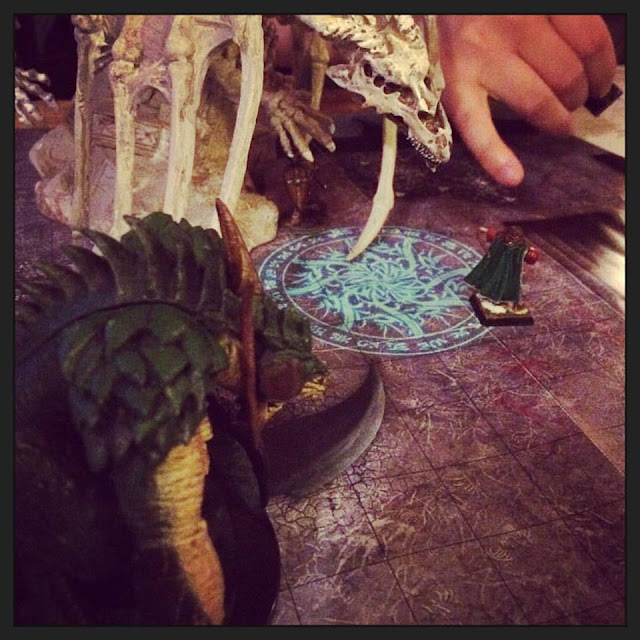 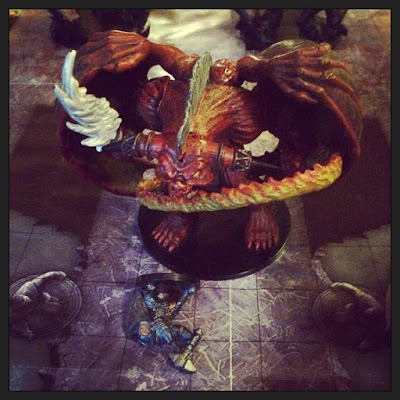 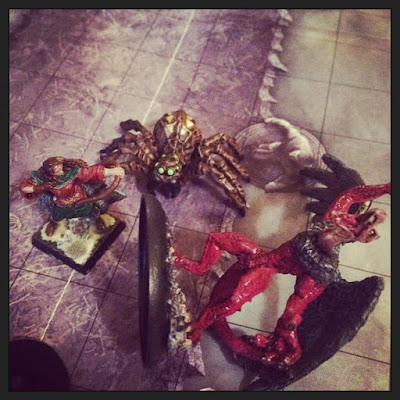 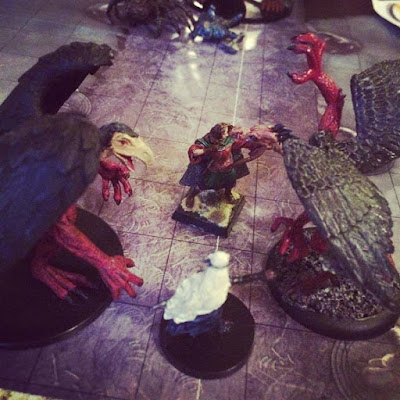 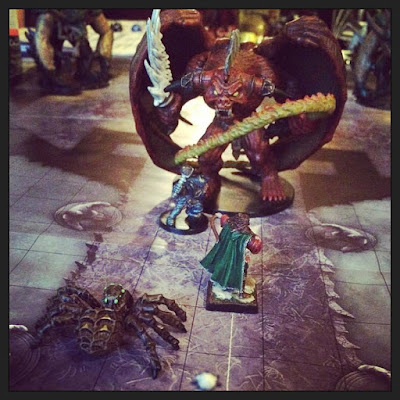 Group battle and defeat the Larva Mage Magrathar, a Nalfeshnee Tyrant & 2 Vrock Warwings. Crossing the bridge from Magrathar's Teeth to the Pillars of Night, Jareth almost falls into a crevasse, but is saved by a web spell from Dhaunayane. They see a gargantuan dracolich afar off, flying towards them, and more circling vrocks. Approaching the Pillar, the Balor Glyphimor and two Glabrezu step out to confront them. 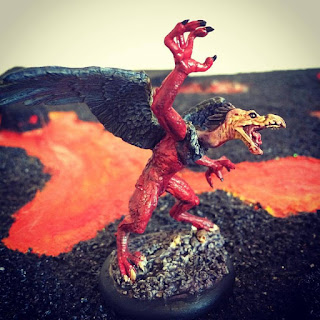 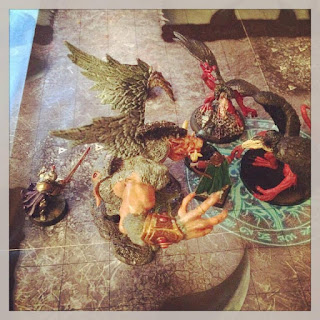 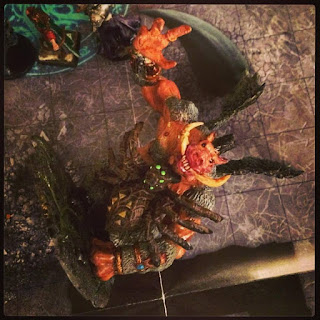 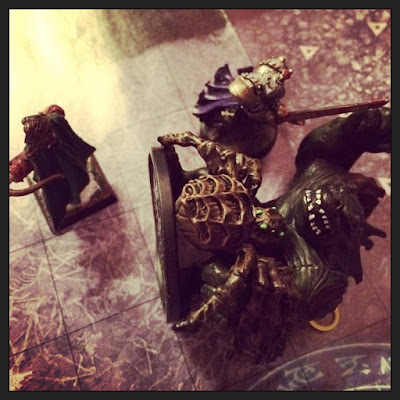 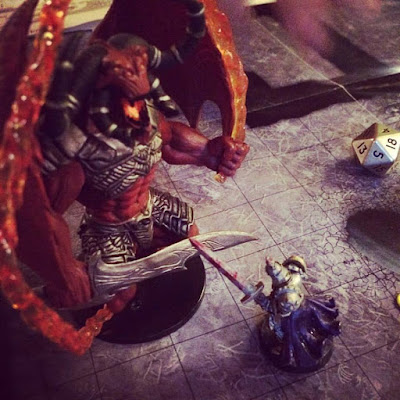 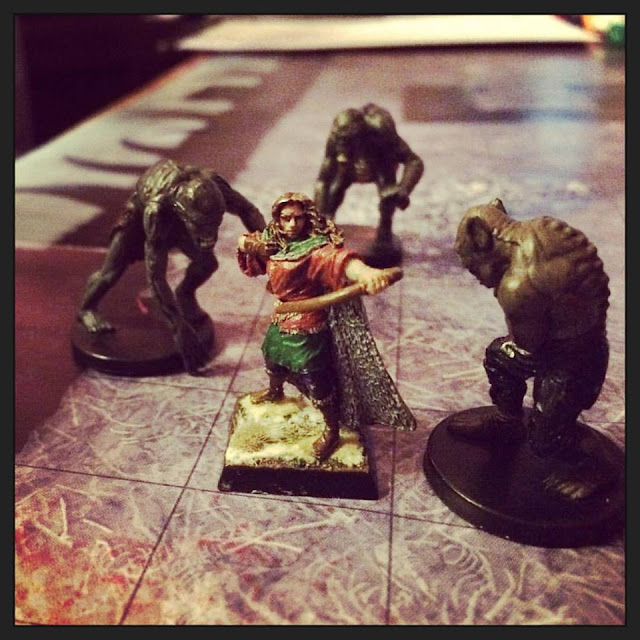 Dhaunayane arrives atop her Lolth's Reaver, having driven back the Cyclops army outside when Lolth sent her Reaver, then traversed through Sartine's Tomb into the Shadowfell. Paelias is missing, possibly overwhelmed by the Cyclops horde. The group kills two Balor sentries & Dhaunayane Portals the group back to Ched Nasad with disabled Reaver to be repaired. Return next day to Portal atop wall with five short-lived drow minions, battle toad demons and ghouls. A Larva Mage worm-thing, Magrathar, who claims to have served Shar as master of the curtain wall, is accidentally summoned into the Portal by Dhaunayane as boar demon & vrocks sweep down from atop the tower...

In battle with:
Magrathar the Larva Mage, Nalfeshnee Tyrant, 2 Vrocks.

Enter the Shadowfell, reach the Pillars of Night - 39,000

{Gerin Legatus arrives after the overnight rest and says he is creating a Linked Portal back to Oreme. Gives Lirael a Shar amulet, tells her to present it to any uncorrupted tomb guardians to be allowed safe passage. In the caves Paelias & Dhaunayane are holding off an army of cyclops summoned by their priests, angered by the death of their Carrion God.}

Lirael meets Mielikki in the forest. Back in Loudwater, a rather tired looking Lady Moonfire discusses making her ruler of the Gray Vale - or the Shining Vale once more. Hallomak Stromm summons her to Waterdeep, where she is sent to join the others in the Gloomdeep Caverns on their quest for the Tomb of Sartine and a secret backdoor to the Pillars of Night, where Shar is held captive by Orcus in Thakorsil's Seat.

The party trek through the caverns to the doors of Sartine's Tomb, guarded by powerful golems, gargoyles, and a gibbering abomination. Much fighting ensues... At last the victorious band open the gates, seeing a short corridor beyond, and discuss making camp.

After six months of searching, Paelias locates the Shadovar Emissary Gerin Legatus in the Netherese city of Oreme. Paelias rescues Gerin Legatus & 4 Netherese soldiers from rampaging Thaluud Tomb Tappers - Gerin & Paelias destroying one each; most of the soldiers are squashed but Paelias leads the survivors out by the Shadow Roads.
In Waterdeep, the group meets Hallomak Stromm - and Selune. Selune blesses them and their gear; the priests supply Potions of Vitality.
Transported by Paelias to the Gloomdeep Caverns north-east of Oreme, they battle Cyclops and their Carrion God, seeking the Tomb of Sartine and Gerin's promised secret approach to the Pillars of Night, where Orcus holds Shar in Thakorsil's Seat. Gerin is horribly wounded by the Carrion God but survives, to be tended by the two soldiers with him. 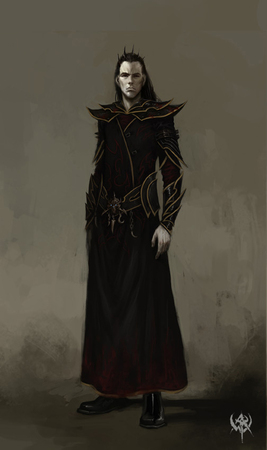