Esme is attacked by Koptila and his zombies and KO'd inside the Necro-Monolith; Arya has returned from Orlbar with news of Valeris' refusal to send troops, and is taken down to the catacombs by Kitana, where they encounter and battle more time-travelling ogres.
In a fierce fight Koptila kills old Olaris Vlakos the Transmuter, but Lirael and Karvol save Esme and the undead ogre king and his minions are defeated; 2 of the time-travelling ogre women escape Llorkh. Karvol throws the Blue Sun Disk into the Monolith and destroys both, then evades the stasis chamber. The group return to the surface, where Esme confronts Boris and initiates rebellion in the name of Bane... 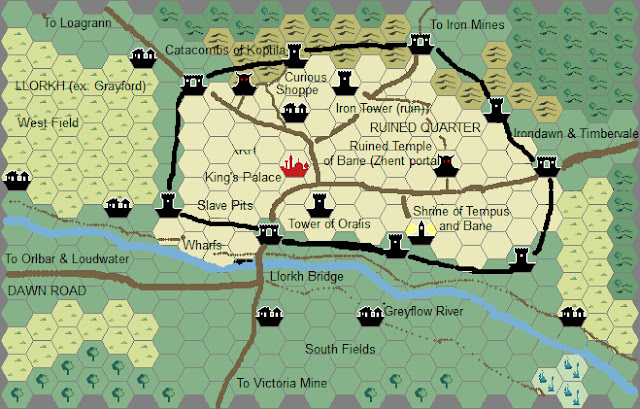 Thousands of years ago, the Ammarindar Dwarves defeated Stonefang, the Primordial Titan, vanquished his armies, and carved out a mountain realm that would last for millenia.
But not all of Stonefang's forces perished in that war. Some, it is said, retreated into the earth, to sleep,  to wait, until Stonefang should rise again...

23/10/79: Arya has returned to Orlbar to report to the Light of the Sun. Llorkh's old coot of a Transmuter Olaris Vlakos is telling anyone who will listen that the rumblings from Stonefang Mountain presage the Return of Stonefang, and that time-travelling ogres will soon descend on Llorkh! King Boris is sceptical, but Esme, Lirael and Karvol decide to check it out (Esme warning Boris' daughter Kitana to prepare the Banites for war) - as does the elven Ranger Ardan, who knows Olaris and has more faith in the prophecies than most.
Descending into the deep catacombs beneath northwest Llorkh, orcs and ogres suddenly pop into existence! These apparent time travellers are soon defeated; further on two ogre women and a fierce hill giant also meet their end. At the end of the catacombs stands a blue necrotic energy monolith guarded by ogre zombies - the thing that is bringing the ogres forward through time? Here the party face the undead Ogre King, Koptila...


Esmerelda's Missives
A letter carried by Arya, back to Queen Valeris:"Dear Sister,I find myself in the vipers den with Boris, I beleive it is time that we rid your borders of a threat. I beleive that I can get Borris's forces to betray him, or at least a good portion, in the name of Illmater.If we can gather Borris's forces with yours on the northern Border to the Mountain king. I beleive we could destroy Borris's reign quickly and efficiently. I could become the queen to the East of you, reigning in Llorkh.Esme.Your eternally trusted Ally.PS, I have enclosed a lock of hair, please forward onto Marsh in Loudwater."

A letter sent to the Pig Lords (Timbervale - Lord Sevrym, Sir Galtos etc):"Dear Brave Sirs, I know you have been gathering swords and men in preperation for a great battle.Myself and Borris have great need of your services. Please start to bring your forces to Llorkh to join with the kings men. For we are to move against our greatest enemy.Hugs and Kisses,Esme."
Posted by Simon at 02:53 No comments: