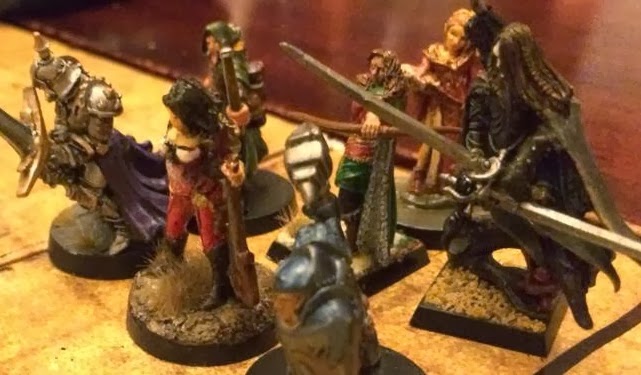 I thought I'd do a meta-note on this campaign especially for blog readers who aren't players in this campaign.
The Loudwater Campaign is a 4e Dungeons & Dragons Forgotten Realms campaign centred around the town of Loudwater and the Gray Vale. The campaign started in April 2011 at level 1. It is intended to go level 1 to level 30 over roughly 5.5 years, April 2011 to around August/September 2016. We play fortnightly at the London D&D Meetup. There is a single party XP tally for all PCs, the group tends to level up about every 2 months, or 4-5 sessions, each of ca 3 hours, so about 12-15 hours of play. This is roughly 6 encounters, but can be as little as 4 major encounters. Progression has thus been about 6 levels per year, and is expected to be roughly 6 levels/year:

29/61480
12.30pm-1.30pm: In the Drow Barracks, the PCs spend a long time debating what to do next, and whether to kill Matron Mother Urlvrain, visit the drow wizard Jhaelant, attack the Death Cyst portal, etc. Eventually they decide to return to the Drow Temple and rest, so that Pealias can recover from his exertions. Matron Urlvrain offers to send her assassin Maarth to aid Quinn & co.
30/6/96
12.30am: Most of the party has just fallen asleep, when they are roused by a commotion as vulture demons and horde ghouls break into the Temple from the direction of the Templar Chapel. The attack is quickly repulsed, with the ghouls retreating, but at the cost of Urlvrain's runescribed Eidolon. The Templar Chapel has been overrun, the Templars dead - Maarth is missing, presumed dead.
7am: Party complete their interrupted rest, rise and breakfast, then head over to Lareen's villa, reaching it without incident. Inside they cut through drow vampire spawn minions and find Zirithian's lover Lareen, a pool of blood, and a glowing red Portal to Deadhold, Jareth is dominated by the vampire Lareen and drained by her wraiths, but overcomes the domination and cuts down Lareen before she can flee through the portal, though her wailing ghosts do escape back to Deadhold.
8am: A search of the villa uncovers a nice ruby-encrusted chalice in the pleasure den, worth ca 750gp.

Quinn:
Quinn's eye fluttered open. It took some time for the fog to clear and for her head to catch up with the rest of her. She was lying in a comfortable bed covered in black silk sheets (they are Drow after all!).Slowly the events of the last few days came back to her. The trek through the Underdark, fighting the Fire Giants, meeting the Drow and entering the city.... the feeling of the Ghouls teeth biting into her over and over again. Shuddering she flexes her neck and shoulders. Still a little stiff but at least everything was still attached, and thanks to the treatment of the Drow priestesses not a scar in sight. Rising from the bed she found her head pounding with a dull ache behind her eyes. Groaning as the dreams of the night swam to the front of her thoughts. Endless horrifying shapes and sounds and two huge dark shapeless figures who seemed to be fighting over something.... her? Lastly the sight of a tall female glad in darkness and death reaching out a hand towards her.Squeezing her eyes shut and banishing the thoughts to the back of her mind. Surely just a by product of the Death Cyst being so close.Rising from the bed she smiles as she realizes her clothes are nowhere to be found and she is completely naked. One of the Drow priestesses enters the small room, drawn by the sounds of movement. Quinn remembers this one being particularly attentive. Smiling wickedly at the ebony skinned elf Quinn begins to saunter forward.'Excuse me.... do you have a moment? There is something I could use your help with.'(Fade out)

28/6/1480 DR
11pm: Leaving the Red Wizard embassy, party are joined by Quinn, while Lirael, Arya, Rylgoth and Myuni return to the drow fane to rest.
11.15pm: Party skirt north past the Commercial district and the broad tunnel that leads down towards the Rothe fields, approaching the nobles' district on the west side of town. Encounter a huge Goristro demon guarding a nobles' villa; attack and defeat it and its horde ghoul allies. The villa seems a major source of arcane energies. Party climbs up to the Templar Chapel linked to the great fane by a high bridge, but the templars refuse to help and tell them to go away. Party take the bridge up to the Fane to rest. Quinn gets intimate with Matron Urlvrain.
29/6/1480
While resting some time after midnight, mist rolls in and Quinn Jareth Pealias Dunstan and Sir Jorah reappear in the Deadhold, where a drow vampire introduces himself as Zirithian, commander of the undead hordes. They realise it's a dream. Zirithian urges them to destroy Ulrvrain, who he says is planning to betray them. After awakening the party confer and decide to seek out Zaknoril, the commander of Phaervorul's soldiery.
11.15am: Party leaves the Fane and heads through the drow city, packs of ghouls avoiding them, down to the military barracks, which shows signs of a recent attack - heaps of dead ghouls and Lolthbound goblins. The doors have been breached, but there are still half a dozen drow warriors inside, including Zaknoril. Zaknoril blames Urlvrain for the fall of the city.
11.30am: Jareth and Quinn discuss a plan to assassinate Urlvrain. Then a drow sentry on the roof calls out that Mezzodemons are mustering the undead forces for another attack on the barracks. The party prepare to defend the barracks...
To 11.45am.

9.15pm Meet the Drow in the Spider Temple, negotiate their way in and speak with Matron Ulrvrain.  Ulrvrain wants them to go kill the drow wizard Jhaelant. Mentions that Myuni arrived just before the Cyst breached.
9.45pm Quinn does a Sending to Myuni, he is stuck in the old Red Wizard embassy and asks for help.
10pm Pealias sees dragonborn looters in the north-east commercial district, sends them an arrow message.
10.15pm Group leaves Fane of Lolth.
10.20pm Reach Red Wizard embassy, defeat drow-wights, meet with 'Lord' Myuni. Myuni suggests that Jhaelant is not the source of the incursion, and suggests an Orcus-worshipping drow vampire lord, Zirithian, said to be native to Phaervorul, is a likely suspect given Orcus' recent alliance with Thay.
10.50pm Rest and get ready to leave the embassy to check out the west side of the city.

Giants of the Gray Vale Region


Hill Giants
The weakest and most common of the giant races, the hill giants once served the Earth Titan Stonefang alongside the lesser Ogres and Orcs, but were killed or driven out by the Dwarves of Ammarindar. Since the fall of Ammarindar they have returned to the foothills of the Graypeak mountains, and are the dominant giant race south of Naurogloth, often fighting or allying with the local orc clans. They may also be found in the High Moor, and small numbers exist in the High Forest.

Stone Giants & Goliath
When the dwarves of Ammarindar defeated Stonefang, the Stone Giant thanes knelt in obeisance to the Dwarven King and were permitted to retain their territories, usually high in the Graypeak mountains, alongside their Goliath or Half-Giant kindred. The remoteness and isolation of many Stone Giant holdings enabled them to survive the Hellgate Keep disaster, though those who dwelt on the lower slopes were not so lucky, eg the stone giant temple at the Pillars of Night was soon corrupted and destroyed by the Hellgate demon-spirit  Naarash. Once the Tanarukk wave of demon-orcs subsided the stone giants were able to expand their holdings, and today they are the dominant race in the Graypeak mountains around Dawntreader Gap and points north, except in the highest glacial regions.

Frost Giants
When the dwarves of Ammarindar conquered the region, they killed or drove out the mighty frost giants. Since the fall of Ammarindar frost giant clans have returned from the far north, moving south through the mountains under cover of winter. Today frost giants may be found north of Adakmi and Ogremouth in the high peaks and glaciers of the Graypeak mountains, but remain uncommon except in the far north of the Graypeaks, where they border the Far Forest.

Fire Giants
Most of the Gray Vale region is not volcanically active. The Graypeaks are old and corroded mountains, although the Tannheim forge was rumoured to draw upon elemental fires. However the Lost Peaks and Star Mounts are much younger, and a major hot spot does lie beneath the High Forest, giving warmth to the great fungus Auramycos . Fire giants have established a small fortress atop a magma vent in the Endless Caverns. There are rumours of entire fire giant cities in the Deep Underdark, bordering the fires of Elemental Chaos.