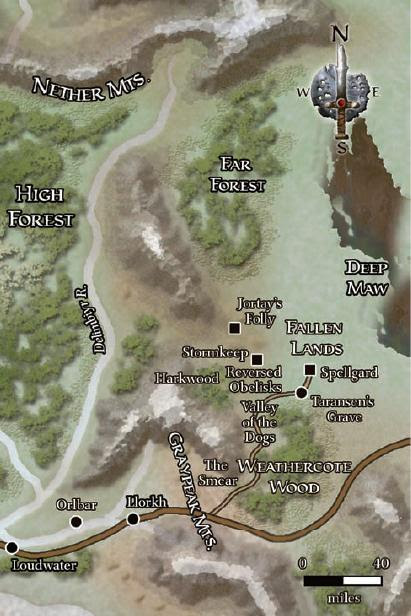 This area, roughly comprising the territory south of the Far Forest, north of the Graypeak Mountains, and west of the Deep Maw, is crisscrossed by ridges of low foothills, dotted with scrubby stands of pine and barren plateaus. Craters, fissures, and fault lines make navigation and orientation difficult. Sheer ridges force travelers along endless twisting paths, and the fractured topography makes good vantage points few and far between.

Rain is rare in the summer and sporadic in other seasons, but the Fallen Lands are by no means a desert. Small streams are common even in the height of summer. Winter sees a light dusting of snow but only the occasional blizzard or heavy snowfall.
The Fallen Lands, as they exist in the aftermath of the Spellplague, remain largely unexplored, but here are a few facts every traveler knows.
✦ Somewhere near the center of the Fallen Lands stands Stormkeep, a mysterious castle surrounded by magical squalls of electricity that never dissipate.
✦ Orcs and goblins live in scattered bands throughout the region. They mostly war against each other, though different tribes occasionally unite under a single banner to raid over the Graypeaks and strike the frontier communities of the Gray Vale.
✦ Travel by day is reasonably safe, although particularly bold bandits sometimes menace travelers who don’t appear capable of defending themselves.
✦ Some explorers speak of a site known as the Plateau of the Reverse Obelisks, which they say is safe to approach and travel through by day. In fact, the denizens of the Fallen Lands grant this area a wide berth, making it perhaps the safest part of the journey to Spellgard. However, it is unwise (if not downright foolhardy) to make camp or spend the night anywhere near this place.
✦ Spellgard lies atop a ridge at the eastern edge of the Fallen Lands. Its ruins are visible from miles away on a clear day.
✦ Spellgard was once known as Saharelgard, a great fortress of ancient Netheril. It is home to Lady Saharel, a ghost who has the gift of prophecy and insight. She speaks of the future or the past to anyone who chances upon her in the Spellgard ruins.
✦ At the edge of Spellgard stands the Monastery of the Precipice. Treasure-hunters and seekers after Lady Saharel congregated there.

✦ Spellgard has fallen to wizard-led soldiers of the Empire of Netheril. The brave knight Sir Calard fell defending the Monastery of the Precipice, now occupied by Netherese troops, who have ordered non-Netherese to leave the ruined city. The Netherese are now investigating the Sceptre Tower.
✦ A half-finished castle in the Fallen Lands is haunted by the ghost of the lord who died before it could be finished.
✦ The great treasures of Spellgard were taken from the place years ago, in the final days of Low Netheril when the fortress was sacked. However, rumors persist of undisturbed chambers there, and of ancient relics that have not seen the light of day for centuries.
✦ Spellgard has lain in ruins for more than a thousand years, but the castle has never been truly abandoned. A shifting population of treasure hunters and prophecy seekers occupied the aboveground ruins, and the old tunnels beneath the site are home to kobolds and fouler creatures.
✦ In the middle of Spellgard is the Scepter Tower, one of the few structures of the old castle that still stands complete. Mystery and legend surround the Scepter Tower, and it is said that no living being can pass within its walls.
✦ The magic of Netheril lingers within the stones of Spellgard. Before the castle fell, its arcanists focused incalculable power within the Scepter Tower, and the chambers of old Saharelgard were warded by magic locks that no one could defeat.
✦ Not all who look for Lady Saharel left when the Monastery of the Precipice fell to Netheril.  Seeker camps still dot the ruins, and some of their residents are as dangerous as any monsters roaming the Fallen Lands.
Posted by Simon at 13:50