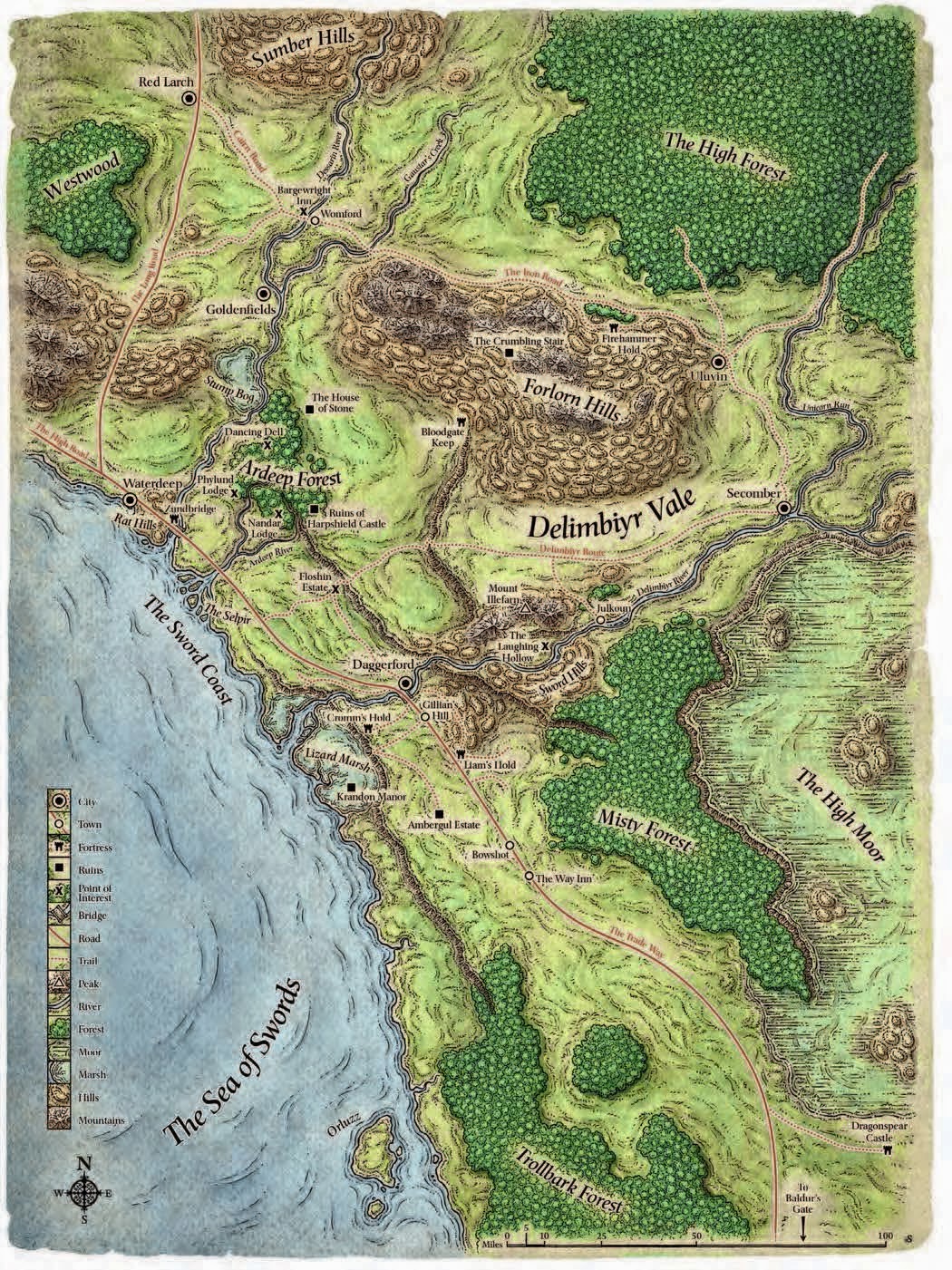 Ruler: Boris, the 'Lord Baldhead', Baron of Secomber, Shadoweir of the Green Regent, Warden of the West, Knight of Loudwater. Vassal to Lady Moonfire the High Lord of Loudwater.
pop. 1090 in 1483 DR; previously ca 1500.
Dominion Confidence Level: Healthy (+4%)
The small, palisaded town of Secomber lies on the north bank of the Grayflow some 65 miles downriver from Loudwater as the crow flies, a long day's journey by river downstream, or three days upriver by boat. Secomber lies just west of the Unicorn Run river where it flows into the Grayflow. The Unicorn Run is crossed here by the Old Bridge & New Bridge that join the land to a small river island, 'The Tear'. Directly south across the Grayflow lies the northwestern extremity of the High Moor. To the north, along the Secomber Trail is the ruined village of Uluvin.
In recent years Secomber has suffered greatly from the raids and extortions of savage High Moor hobgoblins, the Urshani 'worg brothers'. Adventurer bands who have entered the High Moor to deal with the Urshani have not returned. However, on New Year's day 1480 DR a band of twenty warriors, the 'Baldheads' arrived in Secomber, promising to deal with the Urshani threat, and had the people withhold their monthly tribute. Ten days later, when the Urshani horde crossed the Grayflow on their rafts, they were ambushed by the Baldheads and Secomber militia. There was a great slaughter, forty hobgoblins and three worgs slain at a cost of three 'Baldheads' - less than a score escaped back across the river with tails between their legs. The grateful people of Secomber have proclaimed the leader of the Baldheads their new Lord, and he has promised to protect them from all threats.
In late M6 1480 DR Boris aided the Graywood elven ranger Ardan to defeat a vampire lord infesting the ruins of Uluvin, north of Secomber.
In M1 1483 DR Lady Moonfire appointed Lord Boris the General of Loudwater, and he commanded a 500-strong force in victory over the frost giants of Clenderi at Llorkh, aided by the Tigerclaws under Prince Konn. Boris exploited a brilliant pincer movement to trap the giants between his army and that of Llorkh commanded by his daughter, Ser Kitana. In the aftermath there was some reconciliation between the pair. 21/M6 1483 DR at the Midsummer Ball following various heroic endeavours Lord Boris was named by Lady Moonfire as Baron of Secomber and Warden of the West.


Secomber NPCs
Lord Boris (1435-), bald. The bombastic and ambitious Baron of Secomber and Warden of the West under Lady Moonfire, the High Lord of Loudwater. In M4 1480 DR he engaged to Priestess Shera, wedding 21/7. Former bandit warlord king of Llorkh, expelled by the usurper Esme and his own daughter Kitana. He is now a Shadoweir (Forest Knight) of the Green Regent. Boris' first child by Lady Shera, a daughter born 1482 DR, was named Lirael after Lirael, Baron Warden of the North.
Lady Shera (f) (1442-), auburn hair. Devout Forestarm (Priestess) of the Green Regent, also Mielikki & Silvanus. Lonely since her first love died many years ago, Shera's life was changed when Lord Boris converted to the Faith of Mielikki under the influence of the Green Regent and Shera spent many long hours tutoring him in the Faith. She fell in love, and became Boris' fiancee M4 1480 DR, married by the Regent 21/7/1480 on the banks of the Unicorn Run, the day the Heroes of Loudwater returned to Faerun after closing the Death Cyst. Shera wears a tiara gifted by the Green Regent - new sapling and leafy growth from the grove of Milekki forms a small, demure tiara, with a small gemstone in the rough likeness of a unicorn. Since becoming Boris' fiancee, then wife, and a Forestarm of the Regent, Shera has embraced a minimalist approach to clothing.

Fiercehorn the Dusk Unicorn: This large, bearded male unicorn guards the banks of the Unicorn Run, assisting loyal followers of Mielikki and smiting evil. He is a leader among his kind.