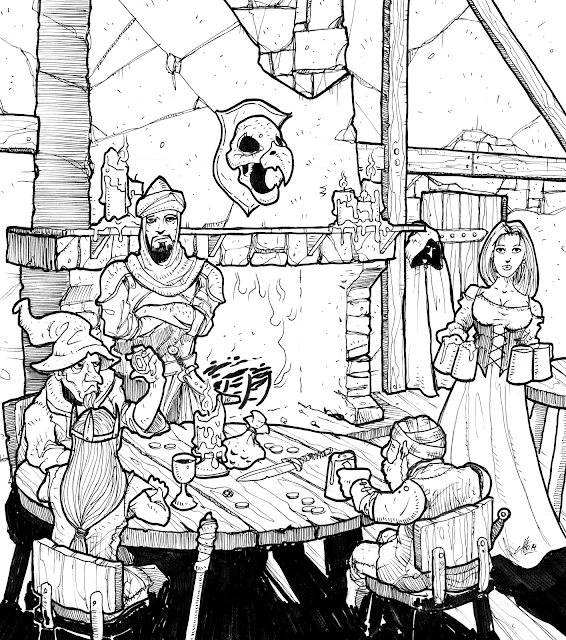 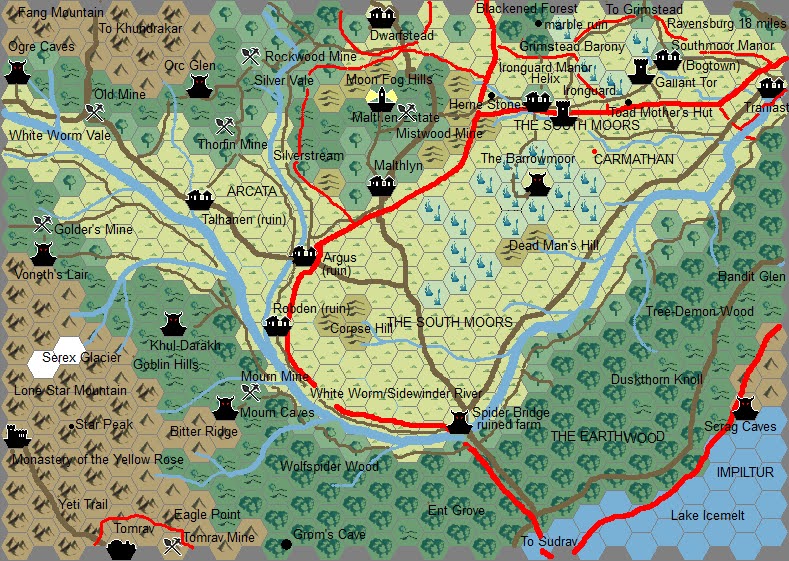 The penniless PCs have slowly migrated, one-by-one, to a backwater village called Helix in the gods-forsaken middle-of-nowhere. You overheard a group of loudmouth adventurers called the Bastards of Bogtown talking about the gold and jewels they recovered from a barrow mound in the swamp. Hey, that sounds like a good idea!
Depending on their backgrounds, PCs may have their own reasons for investigating the Barrowmaze, eg a Wizard PC might be apprentice to the local wizard Mazzahs the Magnificent & seeking to recover lost knowledge of the old Nars. A Cleric or Paladin might be serving the Church of St Sollars (locally headed by Brother Othar) and investigating reports of the dead rising out on the Barrowmoors. 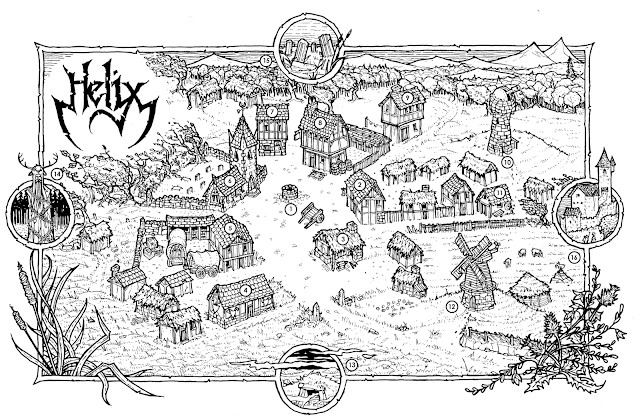 1. Mazzahs the Magnificent is a strange mage who makes his home in Helix. Mazzahs gives a poor first impression. His left eye is slightly larger than the right, giving him a bug-eyed appearance. His wizard cap is bent and his robes are decorated with small charms and knick-knacks that jingle together as he walks. Mazzahs pays well for old Narish relics. Friendly with the Goliath Nathia.

2. Bollo, Owner and Barkeep of The Brazen Strumpet, was a stout warrior in his youth. The barrel-chested Bollo retired from adventuring to open the Brazen Strumpet after he took an arrow to the knee. Bollo is known as an honest and fair-dealing man. He has a loud and ready laugh. He feeds Alaster the village idiot for free, prays to Herne & Silvanus, and supports the local shrine. He normally wears a worn leather apron, and his old warhammer and shield hang behind the bar. It's said that Bollo has heard every Barrowmaze story, and is a wealth of information on the dungeon.

3. Taycee the Barmaid seems the archetype of the feminine, buxom, red-headed barmaid. She is pretty but sarcastic, with a droll sense of humor. She has worked for Bollo for years (since 1357 DR), and has heard most of the rumors regarding Barrowmaze. Born 1339 DR. Rumour M4 '61: Taycee is being courted by Tamson, son of Hendon the Miller, but Hendon is sceptical of the match.

4. Urgritte the Barmaid  is strong and tall, and yet possesses a feminine build. She has long, pleated, golden blonde hair. Urgritte is of Narish stock, and has a strong Soravian accent. Born 1340 DR, she has worked at the Brazen Strumpet since the summer of 1359 DR (M7). Friendly with fellow Nar Greeba.

5. Merda the Barmaid is beautiful, but shorter and with a more slender build than the other barmaids due to her half-elven heritage. She is short-tempered, and is always late serving tables. She seemingly cares little for most folk. Friendly with Mac.

6. Karg Barrelgut the Blacksmith hails from Dwarfstead. He serves as the blacksmith, weaponsmith, and armorer for the village of Helix. Karg possesses a dark sense of humor, and is quick to develop humorous nick-names for his patrons. Karg is well known within Helix.  Karg speaks broken common and prefers to conduct business in Dwarven, if possible. He has a young dwarf, Gern, a nephew who serves as his apprentice.

7. Father Othar of St. Sollars  is well-groomed and makes an excellent first impression. He seems devoted to establishing St. Sollars as the primary deity in Helix and the surrounding area. Friendly with Brother Eamon.

8. Cella the Devotee; rescued as an orphan and raised by Othar, Cella is a devout follower of St. Sollars. She has short black hair and piercing pale blue eyes. She is quiet and reserved.

9. Gamdar the Acolyte  recently joined the faith of St. Sollars in Helix. His mixed blood gives him a strange appearance. He has two small tusks that jut from either side of his mouth, this makes his speech difficult to understand.

10. Krothos Ironguard is the epitome of impetuous youth. Unlike his late father Sir Kell, he looks down on the villagers of Helix and treats the people with disinterest. He is brash, a braggart, and has accomplished little in his life. Krothos is always accompanied by two burly bodyguards (Baddock and Kantin). They typically wear chainmail (with the tabard of House Ironguard) and carry longswords. Krothos has delved into Barrowmaze once. He brags often about the experience. Krothos can often be found in the Foul Pheasant gambling and whoring. In his effort to exert more power and influence Krothos hired a new advisor, Ollis Blackfell.

11. Valeron the Elf stays in the village and plies his trade as a bowyer and fletcher. Valeron is a handsome and lithe Wood Elf of the Rawlinwood. He has sharp features, and long jet black hair. He greets most non-elves with an aloof disapproving gaze, but regardless of his first impression no one can question the quality of his work. Valeron is the finest bowyer and fletcher in the region.

12. Guildmaster Osen, a retired former adventurer and mercenary with grey receding hair, Osen's leg was crippled by an arrow at the disastrous Battle of First Goliad, M6 1357 DR. He came to Helix  summer 1358 DR when he heard of the discovery of a great field of barrow mounds in the Barrowmoor. Although his warrior days are now behind him, Osen created a mercenary guild to represent and organize local labour. The recent rumours of gold and treasure in Barrowmaze ensure Osen has a steady stream of desperate (and greedy) ne’er-do-wells hoping to make a quick gold piece.

13. Billworth Turgen owns Turgen’s Trade Goods in Helix, and also serves as the local agent for the larger Silver Standard Merchant Coster (Caravan Company). He is very friendly with a bald head and a short round body. His appearance belies his nature as a shrewd businessman.

14. Alaster the Village Idiot is a terrible sight to behold. He wears old dirty clothes and smells like ale, vomit, and feces. His hair is a tangled mess matted with mud. He tends to lie about in front of the Brazen Strumpet. T3/M12/1359: Alaster killed an Orc raider in the larder of the Brazen Strumpet with only a broken bottle.

15. Madam Pernicious “Perni” Ticklebottom  is a halfling who once tried her hand at adventuring, but decided she was better suited to a life of comfort. She appears cherub-faced and is always overdone with makeup. Perni is excellent at reading people and can play shy or aggressive, as the situation or client demands. She established The Foul Pheasant tavern/inn/gambling house largely due to the post-war influx of mercenaries in Spring 1359 DR. Friendly with Mac and Gorlock.

16. Harnold Huwen Reginald (or H.H.R) Huffnpuff plies his trade as a jeweler and money lender in the village of Helix. Believed to be part Halfling, he is very short with a head of curly brown hair and a broad smile that seems to extend almost from ear to ear. He always introduces himself to new clients in grand fashion saying, “H.H.R Huffnpuff, jeweler, money lender, and purveyor of ancient antiquities. How may I be of service?” Huffnpuff comes from a long line of jewelers. He has a keen eye for appraisal and a shrewd mind for business. He will happily exchange treasures for gold pieces.

17. Hendon the Miller is emblematic of the tough, hardy villagers that make Helix their home. Prior to raising a family, Hendon served as a Ranger in protection of the village. He is viewed as a local hero of sorts, and villagers still tell stories of his bravery in defending the village against a host of Bullywugs that attacked Helix decades ago. Hendon is a proud and capable man. His sons Tamson and Yusef want to learn to walk the moors like their father.

Rules Stuff
Permitted Player Sources: Player's Handbook, Volo's, Xanathar's Guide to Everything.
Dungeon Master's Guide Variant Rules in Effect
1 Week Long Rest - Page 267. Overnight rest restores 1 hp/level & 1 Exhaustion level.
Training to Level - DMG Page 131 (10 days & 20gp at levels 1-4).
Major Changes to PHB Rules
Standing from prone provokes Opportunity Attack.
Picking up an object from the ground counts as standing from prone - half move & provokes opp att.
Berserker Barbarian may recover 1 level of Rage exhaustion with a Short Rest.
Eldritch Knight Fighter may Attune to a magic Bonded weapon, and use it as their Spell Focus.
Beastmaster Ranger: a Beast Companion may roll initiative and act on its own turn. It may also use its Reaction to follow orders given by the Beastmaster on his/her turn. It does not always stay and fight - if feeling outmatched it might Disengage and flee, or even Dash away.
Maximum AC & Save DC is 30. Skill DCs are not capped (but DC 30 is 'nearly impossible').
LOCAL RUMOURS - HELIX
M4 1361 DR
1. Taycee the Barmaid is being courted by Tamson, son of Hendon the Miller, but Hendon is sceptical of the match.
2. A few days ago (1-2/4/61) the famous Faerun 7 adventurers visited Helix. Gorlock the Warlock lost lots of money at the Foul Pheasant gambling with Pernicious Perni & Lord Ironguard, but the F7 did make a successful expedition to the Barrow Moor and even kept their guide young Vili alive, with enough money to buy a cow, put a down payment on a hovel, and marry his betrothed, Margaret the Baker's Daughter. 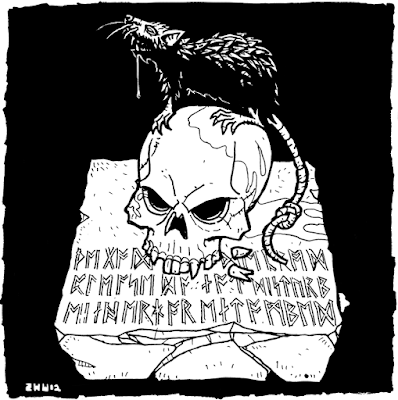